Why are the new climate normals abnormal? 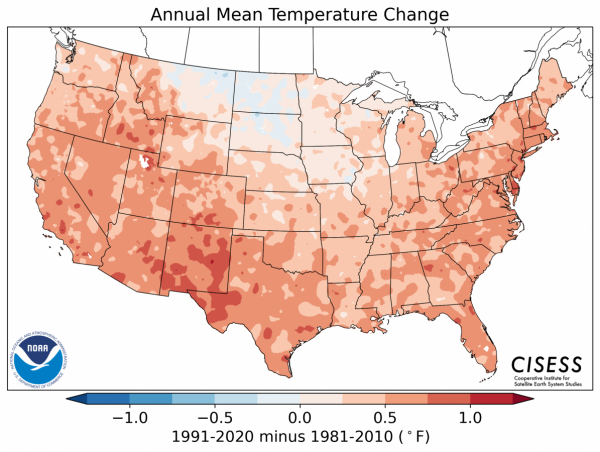 Each decade the National Oceanic and Atmospheric Administration (NOAA) releases a new set of U.S. Climate Normals, providing thirty-year temperature and precipitation averages that contain insight about both current weather and patterns in the near future. In early May, NOAA released the Climate Normals for 1991-2020, revealing the warmest recorded period to date. The temperature increases observed since NOAA first started calculating the Climate Normals (1901-1930) amount to nearly 1 degree Celsius, which aligns with the global rate of warming over the last 90 years. Over half of this warming has occurred in the last two Climate Normals cycles, prompting interest in supplementary Normals calculations over shorter periods of time. In this most recent release, NOAA included supplemental 15-year Climate Normals calculated between 2006-2020.

These new Normals show that the United States has experienced upward trends in temperature and precipitation—by 0.26 degrees Celsius and 0.34 inches, respectively—compared to Normals of the last period (1981-2010). Given the 20-year overlap in years used for these two calculations, these trends suggest sizable, recent increases. The 15-year Normals confirm this. Comparing the newly released 15- and 30-year Normals reveals that the 15-year Normals average temperature calculation is 0.11 degrees Celsius higher than its 30-year counterpart.

Where are these changes most evident?

These average trends obscure significant variation in new Normals both across the United States and over the seasons. For example, while much of the country is experiencing increased precipitation, this trend is notably reversed in the Southwest US. Furthermore, month-by-month Normals reflect changing precipitation patterns in some areas, with high precipitation followed by lengthening dry spells. Similarly, while much of the country is experiencing a warming trend, parts of the North-Central US such as Montana, North and South Dakota, Minnesota, and Iowa show cooling trends compared to the 1981-2010 Normals, although it should be noted that even these areas show warming trends compared to the 20th-century average. The warming trend is most evident in the Southwest (New Mexico and Texas), Southeast (Florida), and Northeast (Rhode Island, Massachusetts, and New Jersey).

Climate is global, after all

The US is not the only country that releases Climate Normals. The World Meteorological Organization (WMO) requires its member states to release Normals each decade to track average conditions across the globe and assess changing temperature and precipitation averages. At the end of 2020, the WMO recommended that Normals be recalculated based on the most recent 30-year period: 1991-2020. The newly released US Climate Normals reflect these WMO guidelines, and they join new Normals that have been or will be released in many other countries around the world. The compilation of these new Normals present an opportunity to take global stock of changing climate conditions around the world to inform global climate policy priorities.

What do these new Normals mean?

Increasing temperatures can place strain on food and water resources and have implications for energy use. They also—both directly and indirectly—affect heath and can be especially consequential for vulnerable groups such as young children, elderly adults, and individuals with underlying health conditions. These new Normals provide insights for policymakers considering climate policy and resources for climate response; farmers determining cropping patterns and planting times; and citizens looking to understand their local (and national) climates.