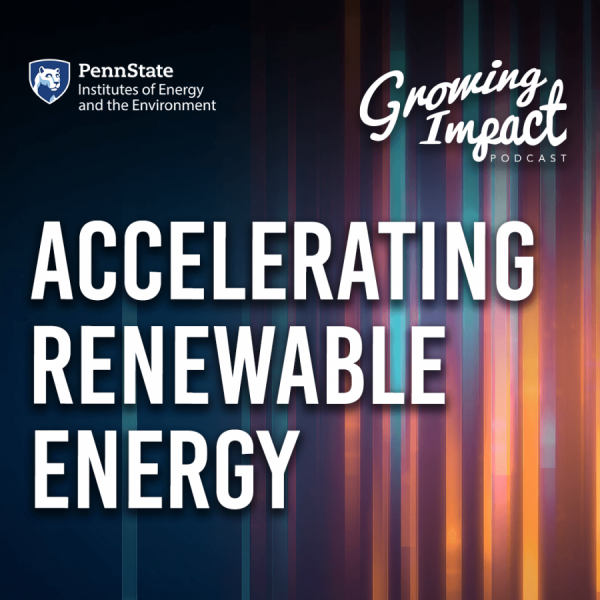 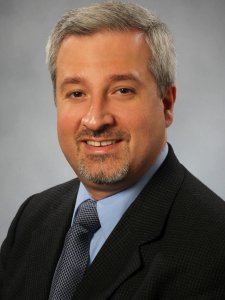 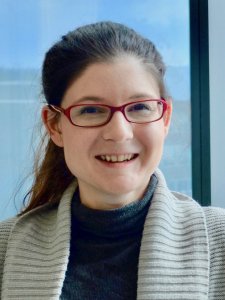 Splitting water into hydrogen and oxygen requires a lot of energy. By introducing catalysts into the process, these renewable energy sources can be created more efficiently. The challenge is that these catalysts use precious metals and are expensive. Mauricio Terrones and Lauren Zarzar are working on a novel method to develop inexpensive and efficient catalysts to split water.

INTRO: It's hard to design the perfect catalyst. We don't have a way to say this is, you know, if you can make this is the perfect one. We're not there yet, so we're taking this approach of, let's try to make a bunch of different materials that we think have promising attributes by a processing method that's never been explored for this, and we're able to make materials that have structures that nobody's previously studied and getting significantly good results.

HOST: Welcome to Growing Impact. A podcast by the Institutes of Energy and the Environment at Penn State. Growing Impact explores cutting-edge projects of researchers and scientists who are solving some of the world's most challenging energy and environmental issues. Each project has been funded through an innovative seed grant program that is facilitated through IEE. I'm your host, Kevin Sliman. Today on Growing Impact, I speak with Mauricio Terrones, a distinguished professor of physics and material science, and Lauren Zarzar, an assistant professor of chemistry. We are speaking about their project that explores an inventive method of creating catalysts using laser synthesis. These catalysts are used in the process of splitting water into hydrogen and oxygen, which can then be used as renewable energy sources. The main objective is to find high-performing catalysts that compete with the more expensive ones currently being used.

On this episode of Growing Impact, we're speaking with Mauricio Terrones and Lauren Zarzar about their project “Laser Synthesis for Control of Water Splitting Catalyst Structure and Performance.” Thank you both for being here.

Mauricio Terrones (MT): Thank you very much. Nice to be here.

MT: What we're trying to do, it's trying to develop alternatives for renewable energy, right? The idea is to split the water more efficiently. So that means we want to split water into hydrogen and oxygen. And then for that, you do this water electrolysis. Then you need to, for this water electrolysis to happen, then you need energy, right? And you need two electrodes. And then you split the water into hydrogen and oxygen. So idea is to reduce the energy of that reaction. And in order to reduce the energy, you can do in different ways. And one of the ways is trying to introduce catalysts that they can accelerate the reaction and they can lower the energy or the potential. Right now, the catalysts that are being used are very, sort of complex and very expensive. So in the case that we are currently studying is the oxygen evolution reaction—so that means that we're trying to obtain oxygen from water—And these catalysts usually are iridium oxide or rhodium oxide, and these are precious catalysts. They're expensive. And the idea is, is it possible to, to introduce a new catalyst that is much cheaper and eventually more efficient? And so that this could be scaled up. And of course eventually this could become a new industry, right? Related to the, to the use of this catalyst. And then it comes the laser synthesis of, of metal catalysts, right? So in order to try, I mean, you can do the Edisonian way of trying one catalyst makes, do a very complex reaction and then test it and then try a different catalyst to mix maybe two or three metals and then see what happens and then try again. And then, so if you do it like that, then it sort of, it's a never-ending story. Of course, you can use theory to accelerate, but you need to do experiments in any case. And that's where the laser synthesis comes because this is a very, very new way of making materials and maybe the depositing catalysts.

LZ: This laser synthesis and parenting method is something that we've been developing in my research group. And the idea is that you're using the focus of a laser to supply a very high amount of energy that will actually induce precursors that are in the surrounding solution to decompose and create nano-particle composites of whatever metal ion precursors you have in the solutions. But in this case, we're typically working with metals and oxides, transition metals and transition metal oxides to make these catalysts. So we're screening materials that don't contain precious metals. And sometimes it's beneficial to have a little bit more messy synthesis technique in some ways to help you test and explore this diversity of materials. Because it's not just about the ratio of the iron, cobalt, nickel, oxygen, etc. It's also about how those elements are organized in a material, and at the active site that will influence the performance of the catalyst.

MT: We found the optimal sort of concentration of each of these elements. And this is very competitive with the current catalysts that are used like, like iridium oxide. So I think we're at that point where we're making very competitive catalysts. And this is just one case. This is with iron, cobalt, and nickel. But it could be we can try other things, right? As, as, as Lauren mentioned, I think this is, this is key because understanding the structure as well, having a certain degree of amorphous, certain degree of strain in this catalyst is what we're trying to understand. And if we further understand the reasons of enhancing the catalytic reactions, then we can try to go back and say, can we make this better? And I think that eventually we will end there, making very good catalyst, over-performing.

HOST: So, you've talked about breakthrough and that this could make a big change in the world. Can you talk a little bit about that? What ways could it be impactful?

LZ: In general, I think trying new processing approaches for catalysts synthesis is a worthwhile activity, right? You can take the same precursors and process them in two different ways. And you'll get two completely different performing catalysts. And it's hard to design the perfect catalyst. We don't have a way to say this is, you know, if you can make this, this is the perfect, Well, we're not there yet, so we're taking this approach of, let's try to make a bunch of different materials that we think have promising attributes by a processing method that's never been explored for this. And we're able to make materials that have structures that nobody's previously studied and getting significantly good results. Because we were developing a new processing method that allows us to access structures and bases of materials that maybe you can't make by other ways. We're synthesizing materials with properties that have not before been explored. And if we can better understand what it is about these particular materials that make the perform better, we can either think about, okay, how do we take this laser-patterning method? Scale it up to make more materials, or now that we know what we need to make and can we design a new, a more scalable or larger scale processing method to then make bulk quantities? But that would be the future, I think if you can demonstrate that you can access structures of materials that have these promising properties. Now we can try to understand what is it about the processing method that allows us to achieve that and we don't have something to aim for in future development.

HOST: Could you talk a little bit more about the need for interdisciplinary experts on your team and how that is helpful, especially in this kind of project where it's so complex?

MT: Yeah, I think. I mean, do you really need different disciplines? And this is where we're learning a lot, right? So I think first of all, theory and experiment, it's an important, an important tool. And we are collaborating with us on this mission with Susan Sinnott and Ismaila Dabo. So this brings together, for example, the chemistry side, this synthesis part that is from Lauren, which is she developed. This new method of laser writing materials. And then the catalysts. And, and we are testing the materials used in the catalytic, we tested the catalytic performance. And we characterize very carefully the structure and the surface and at the atomic scale. Based on those data, we then discuss with the theorists and say, “Well, this is what we have found. This is the best catalyst, is a circular or the best catalyst.” And it seems that we need to understand that. And that's when it comes to some theory models that need to be developed. It's been a long, long journey in terms of where we are. Because in the beginning we were just we were trying just a few catalysts. We saw that there was some of them were over-performing. And if you move a little bit slightly to the concentration that was not performing at all very well. So there are very sweet spots. And, and the idea of using this laser technique is that you can localize these sweet spots within your sea of possibilities that you can have different stoichiometries, different concentrations.

LZ: I'm new to this area of catalysis. I haven't worked in catalysis before. So it's bringing me into a new scientific community. And I think that this is important when we're trying to innovate in a field that's important like catalysis, to be interdisciplinary and bring in expertise and ideas from external places. And in a way I sort of still consider myself an outsider. I'm not an expert in this still. The idea of designing a catalyst, I think a lot of people have this idea of your brain, like a precision. Designing and knowing where everything is at all times and understanding exactly how everything works and that's the ideal situation. But given that a lot of the materials that have strain or disorder often perform quite well. Well then it becomes more difficult to actually characterize them and understand what's going on to the level that I think we would all like to. But then also acknowledging that if those materials that have the more disorder and complexity and strain are performing better, we need to be willing to try these potentially messier synthesis methods to access those phases rather than trying to use much more precise, you know, slow methods of making more well-defined structures, but maybe ones that don't perform as well. So me personally coming into this field, I feel like this pressure from people who are traditionally working in this area that you have to have this level of precision of understanding and synthesis of what you make. And we're coming at it from this direction of, well, we're just going to make, we make a bunch of stuff, screen them by this very different and somewhat messy method. But here we're hitting on really the material is, and now we're trying to understand how they work.

HOST: Today on Growing Impact, we spoke with Mauricio Terrone and Lauren Zarzar about their project “Laser synthesis for control of water splitting catalysis, structure, and performance.” Thank you both for speaking with me today.

LZ: Thank you very much.

MT: Glad to be here. Thank you.

HOST: You've been listening to growing impact upon cast by the Institute of Energy and the environment at Penn State. I've been your host, Kevin Sliman, and this has been season 1, episode 6. Thank you for listening.