Wildfires: The new normal is now 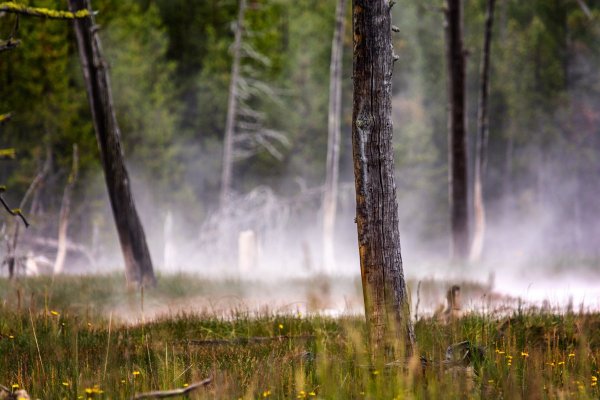 In 2011, we published a paper that predicted continued warming could transform the Greater Yellowstone Ecosystem by mid-Century. I had no idea that just ten years later, I would bring my children to see this magical place, only to have it shrouded in wildfire smoke.

Across the Western U.S., almost 3 million acres have burned so far in 2021, and the wildfire season is just beginning. Air Quality Indices exceed values unhealthy for sensitive groups. Drought forecasts show no end in sight across the Western U.S, portending another record year for wildfire damage, acres burned, and suppression costs. As I write this, the Dixie and Bootleg fires are now each over 400,000 acres with catastrophic impacts on infrastructure and human lives. (For comparison, New York City, all five boroughs, is 205,000 acres, and the state of Rhode Island is 776,960 acres.)

In 2011, we uncovered one of the greatest scientific “surprises” of my career. Before publishing that 2011 paper, previous studies held up Yellowstone forests as being resilient to wildfire. The lodgepole pine trees that dominate much of the landscape have cones that require wildfire heat to release their seeds, evidence of a co-dependence between wildfire and vegetation and showing that wildfire was necessary for the persistence of the ecosystem. Even my own research showed that postfire forest biomass and nutrients recovered by the time another fire was predicted (e.g., within 100 years). I gave lots of talks about the benefits of wildfire and the resilience of the Yellowstone landscape, a hopeful message.

But all that changed when we saw our model results for the future. The same climate conditions that caused arguably the first “mega-fire” in the Western U.S., the 1988 wildfires in the Greater Yellowstone Ecosystem, were likely to become more common in the future, suggesting the probability of fires that would return at a much more frequent interval and with greater severity. Our results challenged our understanding of the ecology of the region: would trees be able to recover if fire intervals are reduced from 100-300 years to 30 years?

The first sign that things were changing occurred with the 2016 Maple and Berry Fires that killed lodgepole pine trees that were recovering from previous wildfires in 1988 and 2000. These trees were only 28- and 16-years old respectively, and now they were getting hit by fire again. The trees and dead wood on the ground were completely consumed, and the severity of the fire was astonishing. It was clear that even 16 years later, there was sufficient fuel to support another severe wildfire. Our predictions were coming true.

What will the future bring, and what should forest managers do? One strategy is to identify places on the landscape that are likely to support natural forest regeneration, helping managers prioritize conservation and restoration activities. Another is to fight fire with fire (prescribed burning) or use forest thinning to safeguard sensitive infrastructure. However, in the immediate future, the scale of these changes is likely to overwhelm capacity for complete control. Climate, humans, and fuel loads will likely trigger large wildfire seasons for years to come, and it turns out that humans (not just trees) are the ones that must adapt.

As I wandered these smoky forests with my children this summer, I wondered how long these systems can retain their resilience. I hope I will be surprised again.